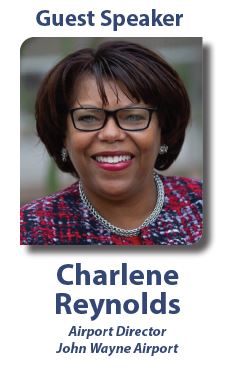 Ms. Reynolds joined John Wayne Airport in June 2022. Previously, she was the Chief Commercial Officer for the Houston Airport System and has more than 20 years experience in the public and private sectors. She is an active member of Airport Council International – North America (ACI-NA), Airport Minority Advisory Council (AMAC), and American Association of Airport Executives (AAAE).

The Airport Director of John Wayne Airport administers all activities associated with the operation of a medium hub commercial airport. She has direct responsibilities for six Airport divisions, including: Business Development, Facilities Development, Finance Administration, Maintenance, Operations and Public Affairs. She also oversees the Airport staff and Airport budget.

**Breakfast treats will be provided.

This event is free to the public, but please make reservations so we can plan for food and seating, at www.newportbeach.com.