The Brightest Night by Tui Sutherland 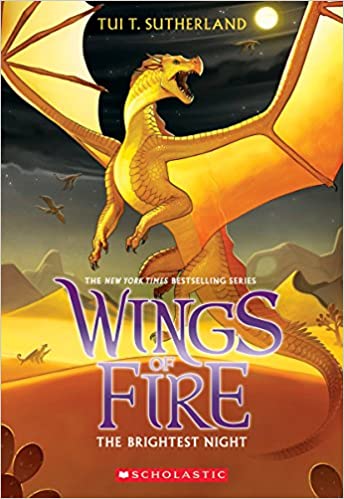 “The brightest night” is the fifth and final book of the original Wings of Fire trilogy by Tui Sutherland.  This book is told from the point of view of Sunny, one of  the most shy and distracted dragons of the group of chosen Ones which include Clay-glory-tsunami and Starflight,who for the past five years have been trying to solve a war that started way before they were born, without the help of anyone except themselves. Over the course of the series Sunny always has been the third wheel by not being able to help herself and protect her friends and she was only happy for she knew that she was a chosen one and really believed she could fulfill the prophecy. But when Moonwatcher told the dragons the prophecy was fake Sunny lost her mind. Over the course of this book she tries to find herself back into herself by following dragons and trying to solve her own problems, but then she is captured and must rely on her friend and allies to help her. After Sunny gets out with the help of a friend, she decides that she will do her best to prove Moonwatcher wrong by  trying to end the war in a final showdown and trying to solve the prophecy and with that, whether she could end the war.

In my opinion this is a book that is perfect for readers who like to be in their own world and like fantasy novels. As for the age group, this book would be best for a pre teen, as it is  fictional and quite a complicated storyline. It could also be for anyone who loves dragons and wants to feel like they know what will happen in the book, because they read the other prequels, just to find out they have been totally wrong. There are a lot of cliffhangers in this book, which make for an interesting series.

What I liked about the book was that it never went on a wild goose chase and just stayed on a path that you could follow. I really like that you can relate to the book and it tells you what Sunny is thinking and how she will act, which helps me teleport into their world. The author  tried for the story to make sense, which I appreciated.

Spoileralert: The few things I didn’t like were that all the queens died or disappeared, for I think that it would be cool if the other queens would have banded together and tried to gain revenge. Also I disliked that the author did not talk about the other queens a lot throughout the series, for i think it would have been interesting to learn more about the war and whether the queens were backstabbing each other.

Overall I thought Tui did pretty well on the series and hopefully she will make a legend story on Burn or Blister or maybe write a new series. Or she could write a series on the queens and what they were thinking about during the great war.

Check out The Brightest Night from the Newport Beach Public Library!