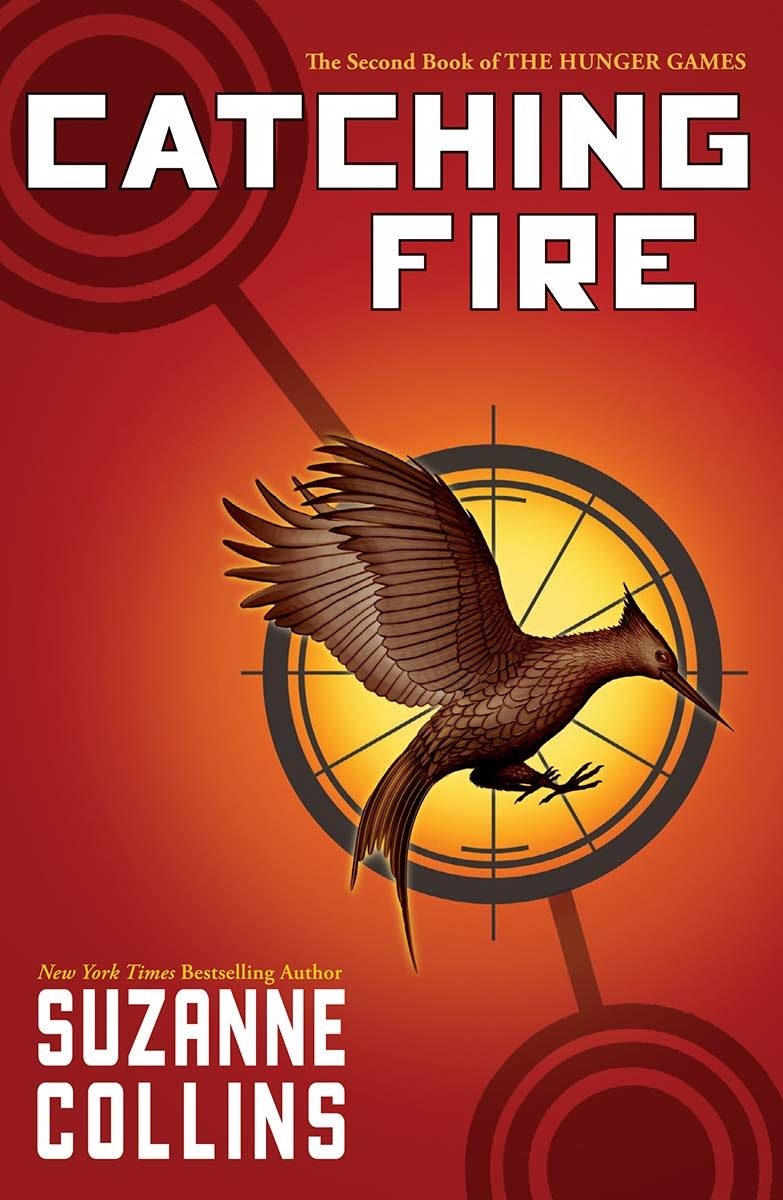 Suzanne Collins’ Catching Fire is the second installment of The Hunger Games trilogy. It follows

Katniss and Peeta after the Hunger Games. They have to keep convincing the world they’re

madly in love with each other and are called back to the Hunger Games. The book starts with Katniss coming back from hunting. When she gets back to her house President Snow is there and tells her that her stunt in the games could lead to another revolution. At the end of the last book she and Peeta were going to both eat poisonous berries since the Capitol wanted each other to kill one another. He tells her that she has to convince everyone that it wasn’t defiance but an act of love. If she doesn’t he will kill her family and friends.

during the games. They go on the victory tour still acting madly in love. Their first stop is District

eleven, the district Rue was from. Rue was a tribute that Katniss grew an alliance with and

mourned her death. When they are up there presenting their victory speech an old man starts

whistling like Katniss did when Rue died. Soon everyone was doing it and Katniss and Peeta

were taken back into the justice building before seeing the old man killed by Peacekeepers. As

they travel from district to district they sense a feeling of rebellion. At the end they plan for Peeta

to propose to Katniss on live television to convince people of their love. It still doesn’t work and

President Snow tells Katniss it isn’t enough. When they get back an uprising in District 8 has


Katniss tells Gale she wants to run away. He tells her he loves her but has to stay and fight like

District 8. Katniss then goes to Peeta, who agrees to run away with her. As they begin planning

they find Gale being whipped in the main square. As he is recovering Katniss realizes she loves

him too and decides to stay.


Since it's the seventy-fifth Hunger Games they are going to do a special version. This year the

tributes will be picked from the winners of previous years. Since Katniss is District 12’s only

female tribute she is automatically in and it’s between Peeta and Haymich for male. Haymitch is

the only other District 12 winner and was their mentor in the last Hunger Games. At the reaping

wedding dress. Her stylist Cinna changes it and when she spins it lights on fire turning into a

mockingjay dress. The mockingjay is like the one Katniss wore on her pin in the arena last year.

It has become the symbol of the rebellion.


The Games begin and right away Katniss is confronted by Finnick, another tribute. He tells her

they’re allies then shows her the bracelet Haymitch gave him. They start traveling and Ktnis

finds that there is an invisible dome that is keeping them in there.


They soon team up with Johanna, Beetee, and Wiress. Katniss realizes that the arena is a big

clock and each section has something dreadful happen when that hour hits. She also realizes

that all the other tributes are trying to keep Peeta alive at any cost but she isn’t sure why.

Beetee comes up with a plan to electrocute all the other tributes not in their group. He ran a wire

from the water to a tree that gets electrocuted every time the clock hits twelve. Since the other

tributes are on the beach it will hit them.


While conducting the plan, the wire gets cut and Johanna hits Katniss over the head with a club

and cuts something out of her arm. Katniss thinks they’re trying to kill her and Peeta so she runs

back to the tree and sees what Beetee was really trying to do. She wraps the wire around an

arrow and shoots it at the invisible dome just as lightning hits it. The dome broke knocking

Katniss out. She wakes up on a hovercraft with Haymitch, Finnick, and Plutarch Heavensbee

that is headed to District 13, the rebellion’s base. Plutarch was the gamemaker for the Capitol

but has also been a secret rebel for years. Katniss finds out that what was cut out of her arm

was her tracker and that District 13 is still surviving. He and the other tributes were in on the

plan to destroy the arena and get the tributes out, especially Katniss. Since she has become the

face of the rebellion they needed her.

help them. Katniss then finds out that they weren’t able to save Johanna and Peeta, the Capitol

has captured them. Katniss starts attacking Haymitch and has to be sedated. When she wakes

interesting characters that have you wanting more. Unlike some sequels this book didn’t ruin the

first book, it added more perspective on the characters we already knew and made us fall in

love with new ones. I couldn’t wait to read what happened next when I was done.

Like anything there were a few parts of the book that I didn’t like. I felt that Katniss was written

to not care that much about Peeta at times but then at others he was everything to her. I just

wish her feelings toward him had been a little more clear. I understand the love triangle between

her, Peeta, and Gale but her feelings sometimes came out of no whare making things a little


Overall this book was really great and did a lot of justice to the series. I give this book a 8/10

line. If you haven’t read the first one I strongly recommend that one too and then too read this