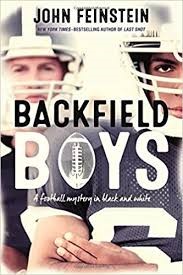 Racism. Racism is an issue that has been occurring for over 300 years, and people of the modern day thought this issue was resolved. With current events occurring, it has been evident that racism is still existent, even if it's still alive within a much smaller population than it was before. An example of racism in literature was evident in the book I recently read. This book is Backfield Boys written by John Feinstein. Backfield Boys details the racism encountered by football players and best friends Jason and Tom. Jason is a white and speedy wide receiver while Tom is an African American quarterback. Both have been playing football their entire lives together and were thrilled to receive full ride scholarships to a prestigious football school known as TGP.

However, little did the two know that they would have to switch positions due to the racism rooted deeply within the school and its coaches. The reason I chose to read Backfield Boys is because I play football and enjoy reading sports novels. I was researching these novels online and came across this book, so I decided to give it a

chance and was happy with my decision. I was also surprised to read about racism involved within football because I have never come across the issue myself in any of the teams I've played for. Seeing this made me more interested in the book and the curiosity added to the reasons I wanted to give the book a chance. Furthermore, I wanted something to kill time since we are in summer, but also a book to get myself mentally prepared for the anticipated return of school.

My favorite character to read about in the book was Billy Bob. Billy Bob is another quarterback on the team with a lot of talent and is also Jason's roommate. He is from Alabama and is completely against racism and the beliefs of the racist coaches. He also constantly stands up for Tom and Jason, knowing that he is risking his chance to play for the team and even to stay in the school. Billy is also very humble and lets his game speak for him, and this is the biggest factor which made reading about him very enjoyable and made him my favorite character in the book.

Additionally, Billy’s sense of humor yet quick wit and thinking gave him an interesting

personality, allowing him to make many friends in the school. My least favorite character in the book was Coach Ingelsby, Ingelsby is one of the coaches in the team who is very racist and constantly rude towards Jason and Tom. He never takes in their input and has a very snarky personality, making him the complete opposite of what a coach should be. Ingelsby also never gives Jason nor Tom a chance to show their skills in practice, let alone a real game, leaving the boys growing a strong hatred for the coach. Ingelsby has a very closed mind and does not take into account the different beliefs of others. For example, most of the school goes to church every Sunday, yet those who have different beliefs, such as Tom and Jason, are not forced to go and can stay in their rooms. Ingelsby, when he found out Tom and Jason were not going to church, indirectly targeted the boys and simply laughed when he heard that Jason was Jewish, ridiculing the freshman.

In conclusion, I recommend Backfield Boys to any teen looking to read a unique book this summer, even if you aren’t interested in sports. If you are interested in reading about how racism is combatted or football in general, I believe this is the perfect book for you. It will leave you wondering what will happen next and will give you a chance to read about how true friendships are made during times of difficulty and competition. I would rate Backfield Boys a 5/5 stars. The reason I chose to read this book is because unlike other books, this novel never gets boring and has a perfect balance between lives inside and outside of football. It is also not repetitive, making the book more enjoyable to read.