What is the Name of this Book? By Raymond M. Smullyan 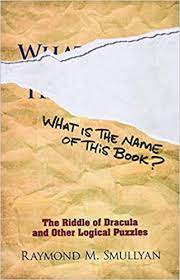 What is the Name of this Book?, by Raymond M. Smullyan, is a book of puzzles and paradoxes.

reason and common sense. Each puzzle gets increasingly more difficult to solve as the reader

progresses through the book. This is a somewhat convoluted book that is difficult to describe

and review, but I will try to do my best.

The Author: Raymond Smullyan was a magician, concert pianist, and mathematician. He lived

of Chicago in 1955 and his PhD from Princeton University in 1959. At Princeton, he studied with

Alonzo Church who is considered one of the founders of computer science.

The Book: The book is made up of 4 parts. Part 1 and Part 4 of the book include jokes about

logic and logicians which teaches a huge amount about logic. There is a section in the back that

teaches about Gödel’s Theorem in a simple way that even I can somewhat understand.

Basically, it states that “mathematical truths cannot be completely formalized.” This means that

even though a mathematical system may be proven true, there are axioms (unproven rules) of

the system that cannot be proven. This is used throughout the book in solving the puzzles. The

provable in the given puzzle. It is mind boggling.

Part 1: The First Part includes the Knights and Knaves puzzles Smullyan is known for. The

Knights always tell the truth, and the Knaves always lie. This is based on the story of two doors

and two guards. One lies, and one tells the truth. One door leads to heaven, and one to hell.

The puzzle is to find out which door leads to which by asking one of the guards a question. This

book is a disguised master course in Boolean logic. Often, a puzzle will step back and ask the

reader to solve a general case, without knowing exactly what situation it will be applied to.

Part 2: In this section the reader is introduced to puzzles of an increased difficulty. It has

puzzles like Part 1, but it includes Normals, who are people who sometimes tell the truth and

sometimes lie. The Normals greatly alter the logic of the puzzles and make them difficult, but

Part 3: This is the main puzzle section, where the reader comes to the actual Riddle of Dracula,

which presents the problem of writing one solution that works for every puzzle up until then,

across several chapters of the book. There are people who can lie or not, people who are

insane and think true is false and false is true, people whose tendency to lie changes by the day

of the week (which is something always unknown, of course) and take side trips into caskets

with truth or lies on them and other variants. Smullyan is not teaching how to solve a puzzle. He

is teaching how the system of these puzzles works.

Part 4: These later chapters discuss openly and (lightly) the same principles as they apply to

other varieties of puzzles, which ends in his discussion of Goedel’s Theorem. That turns this

book into a class not just on Boolean logic, but on the learning and the synthesis that form the

basis of all science.

I loved every single part of this book because I love solving riddles, strategy, chess,

mathematics, and science. I loved asking my family and friends about how they would solve

some of the riddles. The descriptions can be rather complex at times very confusing. It often

involves re-reading and re-repeating the riddles to understand all the intricacies. Some people

were not amused at all. It takes a certain type of mindset to understand and appreciate these

riddles. They are based on word play which is challenging and definitely not for every reader.

the basic concepts that were mainstream in 1978 are still fundamental today. I thought it was

great and this is my favorite book of all time. I give this book 10 out of 10. I plan to read more

books by this author.