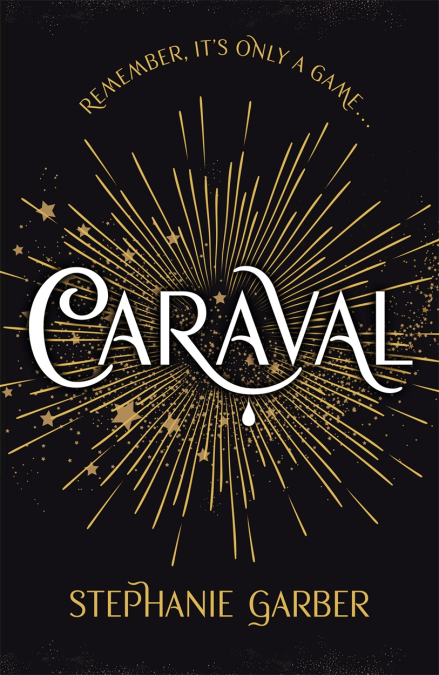 time. The plot is twisted and mysterious and the writing is absolutely beautiful. I would definitely

recommend this book to any fantasy or mystery lovers. Here is a brief look at the story:

Scarlett Draga has lived on the island of Trisda for her whole life. She has always dreamed of

attending Caraval with her sister Donatella. Caraval is an interactive performance where the

lines between magic and reality blur. Just days before her arranged marriage is set to take

place, Scarlett receives the opportunity of a lifetime: A chance to visit Caraval on the Caraval

Master’s private isle. For Scarlett and Donatella, this is the perfect chance to escape their

abusive father and take a forbidden adventure. With the help of a young sailor named Julian,

they travel to Caraval to take part in the performance. But, as soon as they arrive, Donatella

disappears mysteriously. It turns out that in order to win Caraval, Scarlett must find and rescue

her younger sister from the Caraval Master, Legend. Though Caraval is “only a game”, Scarlett

questions reality as she hunts for her sister. She sees things, people, and places that she never

could have imagined. Things are never as they seem. Terrible secrets lay hidden beneath the

surface of Caraval. On a desperate quest for her sister, Scarlett must discover the truths of

Caraval, and the truths within herself.

This book actually reminded me a lot of Charlie and the Chocolate Factory, just a darker, more

grown up version. Both Scarlett and Charlie receive a golden ticket to a magical place. There,

they participate in a high stakes competition with a life changing prize. Throughout the story,

they experience incredible things, some wonderful, some terrible, all beyond their wildest

imagination. And of course, each story is run by their own, crazy, eccentric host.

My favorite element of Caraval was the plot. While it mirrored that of Charlie and the Chocolate

Factory, the author still made it their own and created a story unlike any I’ve read before. Plot

twists kept me on my toes through the whole story. I would say more, but I don’t want to spoil

the story. Another thing that I really loved was the writing and descriptive language that the

author used. It allowed me to visualize the story and the setting. This really brought the story to

The one thing I would have liked to see more of in this story is character development. While the

characters had interesting backstories, their personalities fell a bit short. Very few, if any of the

characters had distinct character arcs, they remained static throughout the story. As I mentioned

before, the plot and the description were incredible, but this made the characters an

afterthought. Despite lack of character development, the author managed to interweave an

element of romance throughout the story. This was interesting and unexpected, giving the story

All in all, I absolutely loved Caraval and I would totally recommend it. It was intriguing, beautiful,

and complex. I could not put it down. I’ve already checked out the sequel, Legendary, and I

cannot wait to read it.