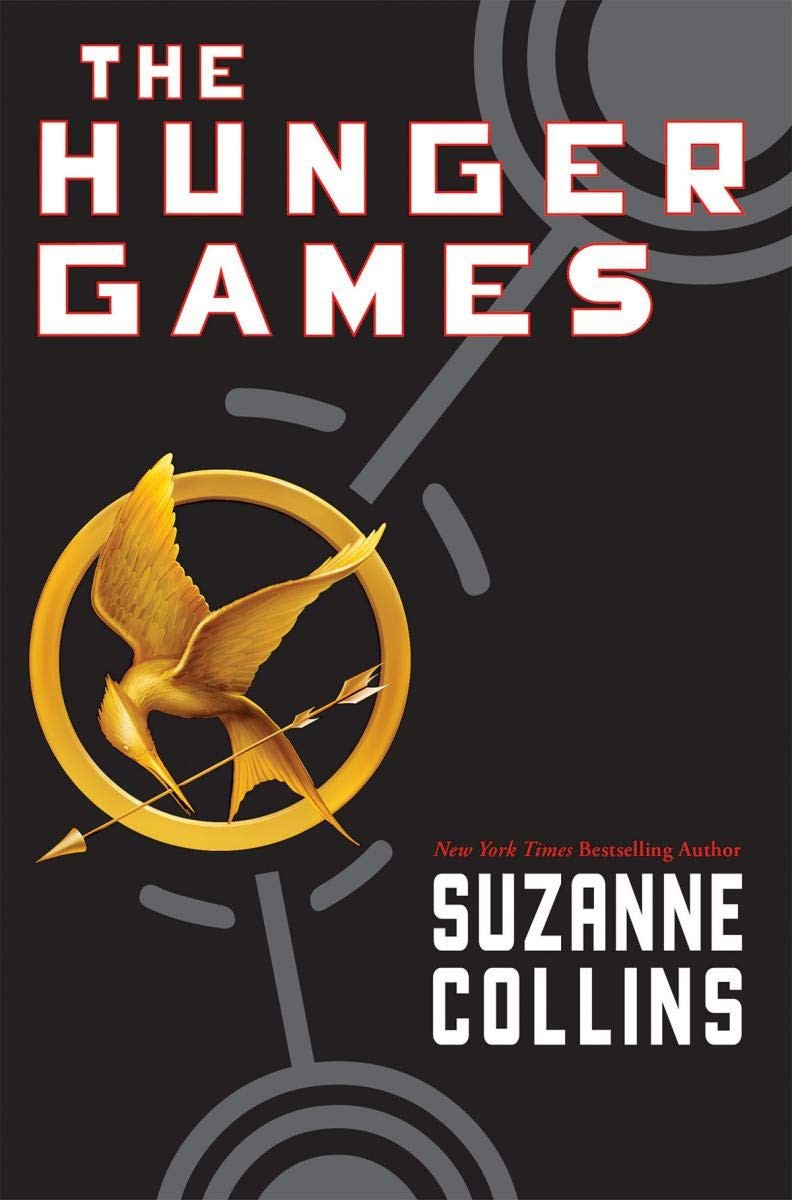 Suzanne Collins’ The Hunger Games is the first in a trilogy. It follows Katniss Everdeen in a

society, in which every year The Hunger Games are held to remind all the districts how powerful

the Capitol is. The Hunger Games is a televised event in which twenty four children from the

one is left standing.


The book starts off with Katniss leaving her house, the morning of the reaping where they

choose the tributes, to go sneak into the woods and hunt with her best friend Gale. They talk

about how they could run away into the woods with their families and survive. Gale’s name is in

the reaping forty-two times and he is really scared he’ll get picked.

their power against the districts.


District 12 is a very poor district and hardly ever has any winners. Their only winner they’ve had

in years is Haymitch Abernathy, a complete drunk who doesn’t care about the games, and he is

supposed to be the tributes mentor. He is supposed to give them advice on how to win and get

them sponsors during the games.


At the reaping the girl tribute that is selected is Prim, Katniss’s little sister. Katniss volunteers to

take her place, to save her sister. The male tribute is Peeta Mellark, a boy who gave Katniss’s

family bread during a time of need, Katniss is very upset because if it hadn’t been for him they

probably would have died and she doesn’t want to have to kill him.


They say goodbye to their families and get on a train to the Capitol. There they convince

Haymitch to actually help them in the games and not just ignore them.

off and try to get Capital sponsors. Katniss and Peeta dress up in all black with fiery capes to

look like burning coal since their district does coal mining. The crowd is very pleased. Later they

have to do interviews, this is when Peeta reveals he’s had a crush on Katniss for years. Later

likely to sponsor them.


Finally it's time for the games, when she gets in the arena she runs away instead of going

toward where all the weapons are. She finds a hiding spot in the trees and is safe. Later that

night she finds out that Peeta has teamed up with the more trained tributes. Katniss goes in

search of water. She passes out from exhaustion right after finally finding water. When she

wakes up fireballs are being thrown at her, one of them hits her leg and injures her. She then

has to run away from other tributes. She is able to climb up a tree, and they can’t get up. They

decide to camp out below the tree and wait her out. At night she sees another tribune, Rue who

points out a nest of tracker jackers, lethal bugs. Katniss cuts down the nest and it falls on the

other tributes but some still stung her. She gets down and starts running away but remembers

that one of the tributes that died had a bow and arrow, a weapon she was very good with. She

runs back to get it and Peeta is there. He tells her to run and protects her from Cato, a very

strong tribute. SHe gets away and passes out in a ditch from the tracker jacker venom.


A few days later she wakes up and finds that Rue has been taking care of her. They form a

bond and come up with a plan to take resources a group of tributes has acquired. She realizes

that the goods are booby trapped and decides to blow them up insead. She succeeds and when

she goes to find Rue at their randevu point she can’t find her. She starts looking for her and they

find her just as another tribute is killing her. Katniss kills that tribute then covers Rue with flowers and sings for her.

can win. Katniss goes looking for Peeta and finds him very injured. Katniss kisses Peeta and

Haymitch sends them food. She realizes if she hypes up their romance more things will be sent.

Cornucopia. Peeta knows this will be a bloodbath and tells Katniss not to go. Katniss goes

anyway because she knows the medicine to save Peetais in there. Katniss gets to the supplies

when she gets in a fight with another tribute. The tribute that came with Rue defended Katniss in

honor of Rue and killed the other tribute and spared Katniss’s life.


Peeta is saved and Katniss kisses him again, earning them more food. They go out to hunt and

when Katniss comes back Peeta is collecting poisonous berries, unknowingly. Another tribute

found the berries and also didn’t know and she ate them, they killed her. The only tributes left

are them and another boy. The water starts running out except for the river by the Cornucopia,

leaving them the only choice to go towards the fight.


When they get there they see Cato running but not toward them, away from Capitol created

mutants. All three of them climb on top of the Cornucopia they start fighting and Peeta is able to

push the other tribute off and to the mutants. Katniss and Peeta are the only ones left but

another announcement is made, that the rules have been changed back and only one tribute

all. She pulls out the poisonous berries and gives Peeta some. As they go to take them the

Capitol announces that they can both win. When Katniss gets back Haymitch tells her that what

decision made by a lovestruck young girl. Peeta finds out and is very angry but still plays along


This first instalment was an incredible story of a society so messed up it actually works.

learning the extremities of these problems.

Katniss and Gale. I felt it was unnecessary and just got in the way of the story. Overall this was an incredible book, it was engaging and I couldn’t wait to read the second one when I was done. I give this book a 9/10 for it’s great plot and amazing characters.