To All the Boys I’ve Loved Before by Jenny Han 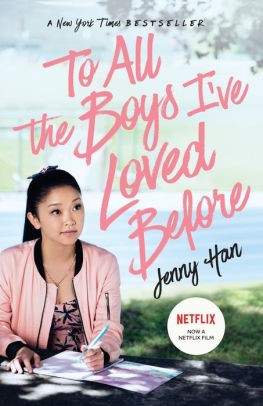 Jenny Han’s To All the Boys I’ve Loved Before is the first in a trilogy. It is a heartfelt romance

and her picking up the pieces after the letters are sent.

up with her long term boyfriend, Josh. On top of having to deal with being the oldest sister and

get sent out. One of which went to Josh. The other four went to Peter from school, John

Aberose from middle school, Kenny from camp, and Lucas from school. When Lara Jean goes

because she can’t have Margot find out.


Later that day Lara Jean and Peter get talking and they decide to start fake dating. Lara Jean

does it so she can keep Josh away and have this whole thing blow over. Peter does it to make

his ex-girlfriend jealous and want to get back together with him. They start hanging out all the

time and people really believe they are together. No one knows it's fake except them. Lara Jean

doesn’t tell Margot because she doesn’t want to lie to her and it is really hard. Josh is really mad

about their relationship and says that Peter isn’t good enough for Lara Jean.


A few months later, they go on the annual Ski Trip together. On the trip Peter tells Lara Jean he

has feelings for her. Lara Jean initially rejects him but later she changes her mind and they

viral video of her and Peter kissing in the hot tub. Lara Jean believes that Peter did it and stops

Jean. Margot overhears them and is upset with Lara Jean that she didn’t tell her and that she

was in love with her ex-boyfriend. After a lot of talking between Lara Jean, Margot, and Kitty

they all make up. Kitty finally reveals that it was her who sent the mail because Lara Jean


When Kitty gave Lara Jean back the hatbox the letters were in, Lara Jean finds all the notes

Peter had been writing to her. Kitty had saved them to prove how much he liked her. Lara Jean

realizes her true feelings for Peter and starts to write him another letter.


This book was a great, heartwarming teenage love story that any romantic would enjoy. I loved

that it wasn’t another love story. It was about family connections and the importance of really

understanding how you feel before rushing into anything. I feel in love with the characters and

have every time I’ve read this book.


There were parts of the book that were unnecessary and just drug out the story. There were


Overall the book was entertaining and well written. I give this book a 9/10 and recommend it to

anyone looking for a good love story with a happy ending.

Checkout To All the Boys I've Loved Before from the Newport Beach Public Library.