Wrath of the Storm by Jennifer A. Nielson 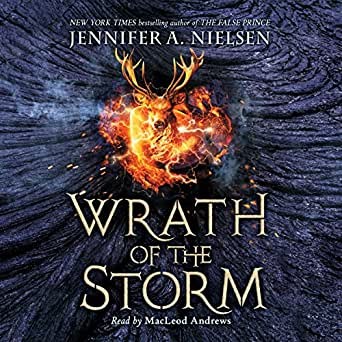 What is power? The definition is the capability or ability to direct others or the course of

events. In the book, Wrath of the Storm , the leaders of Rome such as Brutus, Callistus and the Preators have lots of power, but Nicolas Calva also has some extraordinary ones. In my book review on the previous book of the series, Rise of the Wolf, I explain how Nic gets these powers and what he does with them. Just as a recap, these “gifts” are thought to belong to Julius Caesar and other Roman Gods, and Nic got them by finding an amulet in a cave. Now with his friend Aurelia's life on the line, Nic has to make a decision to help the corrupt government make the Jupiter Stone with his powers, or watch Aurelia as she perishes before his eyes.


In the previous books, Nic has shown how important his family and friends are to him

and will go to any limit to save them. He will save the people most dear to him and will go to any cost to do so. That is why I enjoy reading about this character so much because he has a pure heart and has great intentions. Although it might be hard for some people to believe because of all the destruction he has caused in Rome, he never did it to harm innocent people, only to save the people he loves. Now that Callistus, a Preator leader, has captured Aurelia, who was soon to be Nic’s wife, Nic has to cooperate with him and potentially create the Jupiter Stone. Now to make this Jupiter Stone, Nic will have to put the amulet belonging to Julius Caesar and the Malice of Mars on a special rock and craft the Jupiter Stone.

He knew that he was probably getting tricked and after completing the process, the

Preators would kill Aurelia anyways, so he tricked Callistus and brought a fake rock to him. After Callistus found out it was a fake, Nic had to pay a price by suffering a beating and getting knocked unconscious. There have been many times that Nic has put himself in the line of fire, so the people he loves could escape, and so Aurelia did just that. While the Preators and Callistus were beating Nic and Nic used some of his powers so they could focus on him more and buy Aurelia time, Aurelia ran and got onto Nic’s griffin/dragon and grabbed Nic. The griffin, Caela, knocked all the guards and Aurelia picked up Nic. Nic was unconscious on Caela and Aurelia desperately tried to wake him up, and then after a few minutes he woke up. Nic’s magic was gone and although some people might think was a tragic loss because the whole series was about him and his magic, the magic was kind of like a curse and weight on his shoulders, and with it gone, Nic was finally free. They had played the Preators, and just like always, in the end, good always wins.

I would rate Wrath of the Storm a 5/5 stars because it really had a great ending and didn’t leave me with any questions. Jennifer A. Nielsen did a great job at writing this series and I truly enjoyed reading about Nicolas Calva’s adventures from when he was a slave boy, till now. Although it's a fiction book and isn’t real, what I can take away and what I hope other readers can take away is how important family is to some people and what they would do for their family. Now family doesn’t have to be just blood relatives, it’s the people you love, and Nic loved Aurelia and considered her family. Another message I can take away from this book is if you have any advantage or “power”, don’t use it to hurt people in any way, but to help others. Power can be a curse and used to cause harm, and Nic did cause harm with his powers but not in the way to hurt innocent people, but to save the people he loves.

Check out Wrath of the Storm at the Newport Beach Public Library.