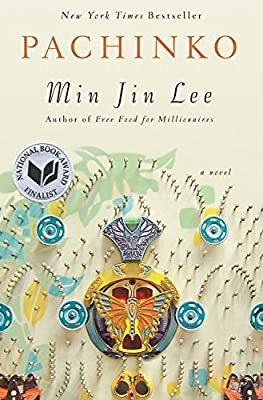 “History has failed us, but no matter.”

This telling first line sets the tone for the novel, perfectly encompassing the presence of an immigrant family in a futile struggle against the relentless, unforgiving flow of time and history.

Min Jin Lee’s Pachinko is a powerful tale of love, survival, and identity, unraveled throughout eight decades that begin with Japan’s imperialism of Korea and span out to the aftermath of the peninsula’s division. The story follows four generations of a family exiled out of their homeland into the foreign streets of Japan, where they struggle to find a place among the Japanese. As years converge into the past, embedded with blessings and regrets that set off a chain reaction echoing down the line, Lee weaves together a story intersecting a father's pride, a mother's toil, a husband’s duty, a wife’s devotion, a son’s burden, and a daughter’s strength in a masterful exploration of the relationships between each complex, conflicted character.

In the quiet suburbs of Busan, Sunja is a modest and hard-working girl who runs a small boarding house with her mother, following the death of her adored yet crippled father. Enraptured by Koh Hansu, the wealthy stranger who has taken a liking to her, she soon becomes pregnant, but upon discovering the shame of being a mistress, ultimately weds and flees to Osaka with a kind pastor in search of a better life while vowing to never see her former lover again. However, Sunja is quickly confronted with reality — discrimination and harassment from the natives as she, along with her husband, Isak, his brother, and his wife, manages to scrape by — reflecting the conflicted identity of a Korean immigrant torn between dignity and survival.

Years later, she resides with her two young sons, Noa and Mozasu, who bear her pride and joy, as she works a steady job selling kimchi to a restaurant with her sister-in-law, Kyunghee. But one day, Koh Hansu, a figure of power and influence as an infamous yakuza boss in Japan, appears before her, and she realizes the grip he’s been holding on their lives, a bitter reminder that will tail her for the rest of her life. Under the urging and care of Hansu, Sunja and her family are forced to move to the countryside in order to avoid the Americans’ bombing of Japan in the midst of the war. During this time, Noa grows into a bright and studious boy always striving to be good and perfect, yet harboring a secret desire to blend into the Japanese, while Mozasu grows into a rebellious and defiant boy with a knack for the pachinko parlor machines that soon becomes emblematic of the family history.

As mistakes of the past and untold truths emerge over cracking facades, the estrangement of possessing Korean blood continues to haunt the family, eventually triggering a series of acquaintances, expectations, and tragedies that bleed on to the lives of Noa, Mozasu, and their relationships and families, ultimately circling back to where it all began. Along the tide of time and age, new ties are made as old ones are severed, the vision of a motherland gradually disintegrating, all the while the taste of nostalgia and wanting lingers to fuse with traces of forgotten youth, promises, and memories.

One of my favorite aspects of the novel was the rich, in-depth look into twentieth century Japan and Korea, an influential and fascinating chapter that is sadly rarely covered in school. While the central story orbits a family’s relationship, the setting of the story in the era of Japanese imperialism as well as the lineage of Korean immigrants establish a historical perspective of the dynamics between the Koreans and Japanese. Despite the backdrop of ingrained racism and inescapable poverty, with the Japanese being the perpetrators and the Koreans, victims, the complexity of all of the characters — each motivated by unique factors, making erroneous decisions, fostering dreams doomed from the start, and toeing the line between noble duty and animalistic desperation — humanized each side and allowed me to look past labels to gain a new sense of empathy towards the figures who, at the end of the day, were so human.

Lee’s multi-dimensional understanding of women is also permeated throughout the book, with themes like love and motherhood prominent across every relationship. With the roles of the different female characters, both major and minor, Lee portrays the layers of intricacies within women in their respective socio-economic contexts: women braving through marriages and miscarriages, women burdened by unintended repercussions, women subservient to their husbands’ patriarchal beliefs, women ensnared into societal expectations, women who are fiercely independent, women who reminisce about their homeland in Korea, women who long to escape to the dreamland of America, proud women, lonely women, regretful women, happy women, but always, suffering women. Yangjin, Sunja’s mother, teaches her that “a woman’s life is endless work and suffering,” a mantra that manifests into a foretelling throughout the rest of the novel into the reality of twentieth century Korean society.

Within every character, Lee captures a different aspect of the Korean entity. Within the prideful, hardened Hansu who has learned to make a name for himself as a notoriety lies a nostalgic hero; within the internalized, self-destructing desires of Noa’s tragedy lies a quiet boy who longs to reclaim his sense of self. Within the patriarchal impositions of Yoseb lies the best efforts of a man to follow his duty; within the fortuitous success and ambitions of Mozasu lies the resignation of an immigrant who has lost his homeland. Lee’s careful intertwinement of the personal with the political crafts a set of characters who are neither minimized nor glorified, but acknowledged for their perseverance and courage amidst a world carved out to reject them. The novel is a documentation of their lives, at the same time an ode to their resiliency as well as an overarching homage to the struggle for Korean freedom, independence, and identity.

That being said, some elements of the story felt a little forced, maybe even stereotypical at times, especially with recurring deaths, pregnancies, or other shocking, life-altering factors, which seemed to be a sort of ploy utilized to speed up or maintain the pace of the story. While the prose was detailed and elegant, the occurrences within the story itself would sometimes feel a little disruptive to a more natural flow of events. Another slightly disorienting factor was constantly having to adjust to the time skips almost every chapter, which would sometimes be eight or nine years at a time. Though given that the story occurs over eight decades, I can see why Lee chose to isolate certain events and glaze over other years, which, in turn, may have contributed to the cycle of dropping sudden plot-bombs to jog the story.

Overall, I still feel that the positive aspects of the novel far outweigh the arguably negative aspects. Despite amounting to nearly 500 pages, I was captivated by the storyline, history, and characters throughout the whole book, having blazed through the majority of it within one sitting. As it remains currently as one of the most memorable books I’ve read this year, I would rate it a nine out of ten, and highly recommend it to anyone, whether it is someone interested in 20th century or Asian history, a Korean immigrant seeking a sense of solace, or even just an average person with no prior knowledge looking for a good book to settle with during quarantine.