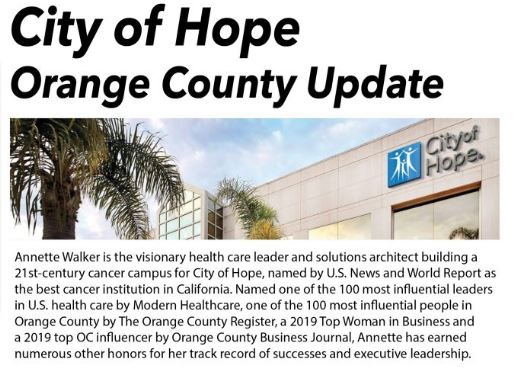 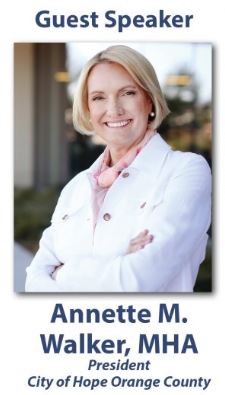 Annette Walker is the visionary health care leader and solutions architect building a 21st-century cancer campus for City of Hope, named by U.S. News and World Report as the best cancer institution in California.

She is a sought-after keynote speaker who is invited to share her expertise with national and local audiences. Her thought leadership has been featured in Forbes, STAT News, Good Housekeeping, Modern Healthcare, American Business Leader and more.

Annette has served on a wide range of boards for more than 15 years, a testament to her long-standing commitment to serving her community. She earned a master’s in health administration from University of Minnesota and bachelor of science degree from Loyola Marymount University, Los Angeles.

A 40-year resident of Orange County, Annette believes her proudest achievement is partnering with her husband, Chuck, to raise a close family of six that now includes a dozen grandchildren.

**Breakfast treats will be provided by Golden 1 Credit Union.


This event is free to the public, but please make reservations so we can plan for food and seating.